skip to main | skip to sidebar

Okay I apologize for the crooked neck you will get but I was trying to get only OUR star in the video. I always forget that the whole thing will be sideways. Here is a preview of Amy's recital dance. The girls got their costumes tonight and got to try them on and strut their stuff for the parents. Get your tickets for the recital now! Amy will be starting the dance off by herself on stage, shaking her maracas! 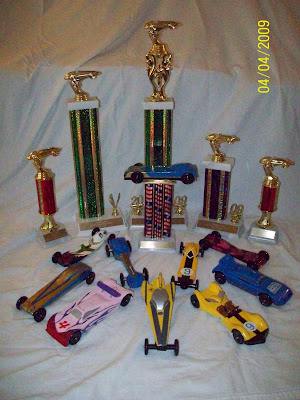 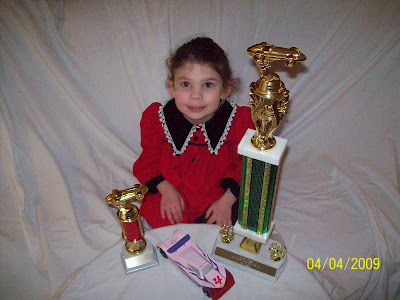 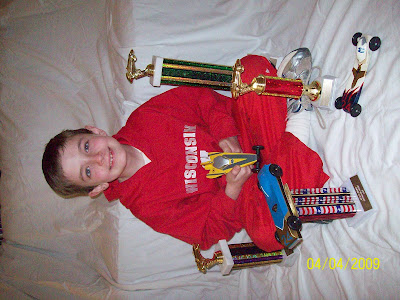 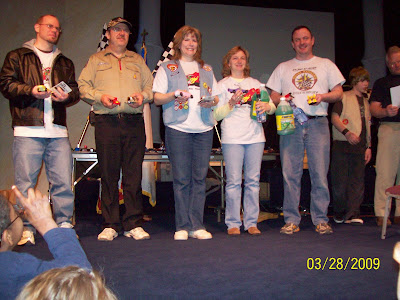 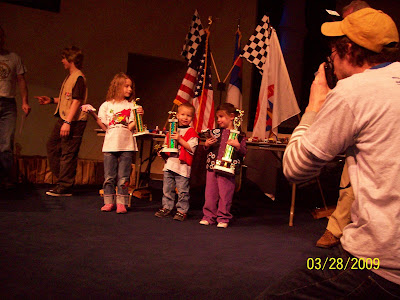 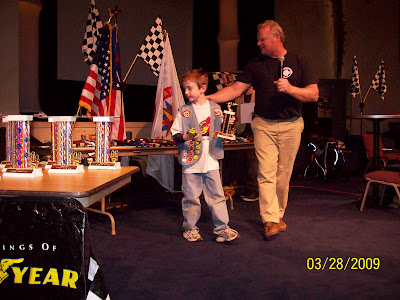 Bog The Vth here... SO it was the area pinewood Derby on the 11Th. 90 some odd cars showed up. Rocco reset his tires and graphite. But while his car still looked awesome it lost one tenth of a second somewhere and that was enough to put him in fifth place which he got a nice trophy and some stage time. It was really special this year for him. As I have said before we have been doing this for three years now and have had some success. But this year The only thing I did on Rocco's car was to help him with the layout and cutting of the car, drilling some holes and not letting him handle the lead weights. The rest he worked his tail off for and with his car finishing in the trophy times at both races he seemed very satisfied with his results and proud of what he accomplished. Both races he was at the top of the overall speed charts and he already has next years car planned so we will have to see how that goes.
Amy's car got much faster and put into the division it was supposed to be in. She won first place in the open division. She got a trophy as big as her and a huge hug from her older brother. She was grinning ear to ear and I think we have created a monster. She is pulling out paper and trying to design a car for next year.
As for the adults well Becky got put into the open division as well. Unfortunately her car ran in fought place and they only trophy'd out to third so my lovely wife who beat the heck out of me by one one thousandth in the outpost race did not medal at this area race. But my lovely yellow slice of pure speed did what I thought it could. It won a whole bottle of windshield washing fluid and black magic dash cleaner for winning first place in the leaders division. So for the outpost race we were 4 for 4 on the podium. For the area race we went 3 for 4. Not bad for a small race team with a name like Fat Tony's. There is no funny or cute things to be said. There is just the pictures you see before you. What we won this year and what we have one over the years. Good luck to all and god bless.
P.S. Amy wanted to dress up on the day we took pictures so that is why she looks so good. That is also how hse went to home depot to build some bird house's. She sure can dress well!
Posted by Becky at 10:05 PM 1 comment:

We were treated to the Prairie Kindergarten, 1st Grade, and 2nd Grade Spring Concert last night. It was standing room only but very nice. Rocco was dreading it as music class is not his favorite and I'll confess his teacher isn't one of my favorites. The theme was Holiday songs so they sang about Christmas, Valentine's Day, Easter, President's Day, Martin Luther King Day, and even the Iditirod Trail. Who knew that this is a holiday somewhere? Here is our handsome boy. His tie fell apart so he borrowed one of Dad's. 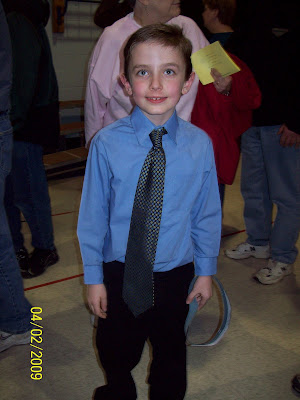 P.S. Don't worry an update on the results of the Area Pinewood Derby will be coming shortly!
Posted by Becky at 6:41 AM 1 comment:

Becky
This blog is a way for me to record the joys and trials of each day. Fortunately it is mostly joys. I have said a million times I wish my kids were recorded 24/7 because I can never remember all the funny things they say and do. I am wife to Bog (shortened version of our last name with a long O) and mother to Rocco and Amy , striving each day to do God's will.