skip to main | skip to sidebar

Sunday evening was the year end celebration for Rangers and Rangers at church. Amy achieved her Honorary Rainbow pin by earning all possible badges over the last two years. 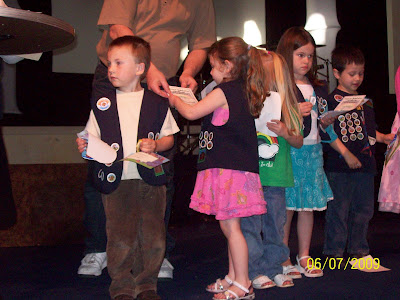 Rocco began attending Rangers two and half years ago. Most of the boys in his group started when they started Kindergarten. He also earned all possible badges for his group along with three other boys. That had never been accomplished before and all the boys were presented with a compass. We are really proud of him.

I also would like a tiny recognition as I have sewn on all the badges on the kids vests and have a bunch to put on Rocco's vest too as he earned a bunch in this last quarter. It may take me all summer.
Posted by Becky at 5:33 PM

Becky
This blog is a way for me to record the joys and trials of each day. Fortunately it is mostly joys. I have said a million times I wish my kids were recorded 24/7 because I can never remember all the funny things they say and do. I am wife to Bog (shortened version of our last name with a long O) and mother to Rocco and Amy , striving each day to do God's will.